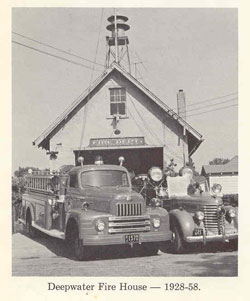 The Village of Deepwater had fire protection from its beginning in 1917, when it was served by the DuPont Dye Works Fire Company. The town continued to grow and with the increase in homes it required additional fire protection.

The Deepwater Fire Company (formerly the Lower Penns Neck Fire Company) was organized in 1928, with Theodore "Dorey" Hall as the companies first Fire Chief. The original firehouse was located on the east side of North Broadway between Chester & Plant streets. A 1929 Graham Soda-Acid Chemical Truck was the company's first fire truck. The truck was delivered the same year John Dwyer was elected as the company's 2nd Fire Chief, where he served as Chief for 20 years. The Fire Company and the close-knit community of Deepwater managed through the days of the depression, and in the late 1930's decided to purchase a new fire truck. A 1939 Diamond-"T" 500 G.P.M. Pirsch-Quad Pumper was proudly acquired to serve the community.

Milton "Mike" Wolfer was elected as the 3rd Fire Chief in 1950 and served as chief until 1958. In 1951, the company began mutual aid assistance to the New Jersey Turnpike Authority and the Delaware Memorial Bridge, which later became the "Twin Spans". As the years passed, the Fire Company grew in both volunteers and equipment, and in 1953 an International 750 G.P.M. Pumper was purchased. With all of the growth there was a need for a larger firehouse. The Deepwater Fire Company's current firehouse began construction, after land was purchased from the DuPont Company in 1956. The new building located on the west side of North Broadway between Grant and Monroe streets was dedicated in 1958. 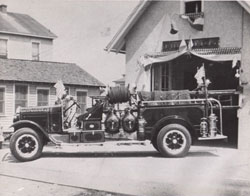 Paul Gray Sr. became the Fire Company's 4th Chief in 1959. Plans to replace the truck bought in 1939, resulted in the purchase of a 1962 Mack 750 G.P.M. Pumper. Some 5 years later, a 1967 International Utility Truck was purchased to carry additional equipment. The Fire Company now proudly housed 3 pieces of equipment.

The Fire Company elected Grover Herrman as Chief in 1971. During Chief Herrman's term, which lasted through 1979, the company acquired several pieces of equipment. A 1970 Mack Pumper was purchased to replace the 1953 International. In 1972, the Company acquired a Mobile Generator and Light Unit Trailer, which was transported behind the utility truck. Also in 1972, construction of a new meeting room and kitchen began, with the dedication of the new addition held on April 10, 1973. In 1977 the company purchased it's first air cascade system.

Howard Gant was elected Chief in 1980 and served until 1986. Under Chief Gant, the company purchased a 1981 Ford F-250 Utility Body truck, which served as a generator/light & air unit. A 1984 Mack Pumper was acquired to replace the 1962 Mack, and a 1986 Ford 8000 Utility Truck was purchased to further fulfill the companies needs. The company also acquired a 1952 Dodge Power Wagon, which was converted into the companies 1st Brush Truck.

Chief Kevin Zane was elected in 1987 as the fire companies 8th Fire Chief where he served a 3-year term. 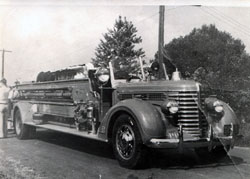 Jeff Ayares was elected as Chief in 1990, and served through 1993. During his term, the Company purchased a 1992 Mack Pumper with a National Foam system, to replace the 1970 Mack. The 1984 Mack was also refurbished, adding an enclosed cab and upgrading the truck body and equipment. The company realized the need for additional support vehicles to transport firefighters. A used 1985 Chevy Suburban 4x4 was donated by the Dupont Chambers Works and renovated to serve as a troop transport vehicle. A used Pennsville Township Police car, a 1991 Chevy Caprice, was modified for use as the companies first Chief's Car.

Also during Chief Ayares's term, The Deepwater Dive Rescue Unit was formed in May of 1990. The team comprised of Deepwater firemen and divers from surrounding fire companies converted the 1986 Ford Utility into a Dive Rescue Truck. They raised the funds to purchase dive equipment and a 1993 Polar Craft aluminum boat, 30 hp Johnson motor & trailer. A 1986 Boston Whaler Rescue Boat was transferred from Pennsville Station #5 to the Deepwater Fire Company to further support Dive Team operations. In June of 1991, the Dive Team was recognized by the United States Congress. The company received the Congressional Fire Services Institute Award for their role in a dramatic life saving rescue that occurred in the Delaware River. The Dive Team continued to operate until it was disbanded in the spring of 2000.

Jerry Treece was elected & served as the companies 10th Fire Chief for the year 1994.

Charlie Winfield was elected as the companies 11th Fire Chief in 1995 and served a 3-year term. During Chief Winfield's term, the fire company purchased a 1996 Chevy Suburban to replace the 1985 Chevy Suburban.

Jeff Hoffman was elected as the companies 12th Fire Chief for three consecutive terms 1998 - 2006. During his terms, the company purchased a 1999 Ford F-350 Diesel 4x4 Brush Truck to replace the 1952 Dodge power wagon. Chief Hoffman, working with the Delaware River and Bay Authority arranged for the donation of a 1997 Ford Crown Victoria Chiefs Car to replace the 1991 Caprice. Under Chief Hoffman the fire company received a $50,000 grant to make repairs and improvements including handicapped accessible ramps and bathrooms.

The 13th Chief of the Deepwater Fire Department, Mark Ayares, was elected in 2007 and has since made many steps into the future of the department. The department has purchased a full compliment of Rescue Tools and has reassigned the 2005 Pierce Rescue Engine from an Engine(7-1) to a Rescue(7-9). This has all been part of his Rescue Initiative.

Joe Hogan was elected as the companies 14th Fire Chief in 2010 for three consecutive terms until 2018. Chief Hogan continued the vehicle rescue initiative with the redesign of the rescue engine. The apparatus underwent months of work to make it more effective for the fire department. More efficient tools were also added to keep up with the changing demand of the conditions in the industry. In 2010, the department received a $50,000 grant for equipment from Dupont Chambers Works for SCBA's, thermal imaging cameras, saws and portable lighting.In 2013, a apparatus replacement exploratroy committe was formed to begin the process of replacing the aging Engine 7-2. In 2015 a new Pierce engine was delivered, replacing the 1991 Mack Engine 7-2. 7-2 was sold to a fire department in West Virginia in November of that year. From 2016-2017 Chief Hogan researched a possible replacement for the departments 1982 Mack/Baker Tower Ladder. In 2017 the department purchased a used 2003 Seagrave Aerialscope Tower Ladder from Cherry Hill Fire Department. The 1982 Mack/Baker was sold shortly before to a Huntington fire district in NY. In 2018 a Chevrolet Silverado crew cab was purchased to replace the 1996 Suburban for a utility vehicle. During that year hydraulic rescue tools were also added to the Tower Ladder to expand vehicle rescue capabilities along with rope rescue equipment. Chief Hogan obtained another donation of SCBA's with the assistance of Past President Matt Chase, in the amount of $65,000 by Dupont in 2018. During Chief Hogan’s term he was also appointed as the Pennsville Township Fire Official.

Much has changed throughout our company's history. Trucks & equipment have greatly improved, Chiefs & Officers change as years go by, and many volunteers have come and gone. However, one thing remains unchanged. The Deepwater Fire Company and its volunteers proudly continue to serve their community, just as it has for the past 80 years.